This project was a joint collaborative effort involving various partners including international agricultural research centers, local and international development NGOs, National Agricultural Research Institutes, government agencies, private entrepreneurs, and farmers. At Purdue, four departments and one unit were involved including Agricultural Economics, Entomology, Food Science, and Youth Development and Agricultural Education and the International Programs in Agriculture. The PICS1 project was funded for $12.0 million by the Bill & Melinda Gates Foundation.

Over the five-year life of the Purdue Improved Cowpea Storage (PICS) project, PICS reached approximately 1.7 million households and increased total income in the region by $255 million. During that time, the PICS project distributed triple-bag technology to 30,800 villages and taught more than 1.6 million participating farmers how to use the bags to save their cowpeas from destructive weevils. PICS bags have reached villages in 10 different countries in West and Central Africa.Because cowpea prices often double or triple from harvest time lows to seasonal highs in the months before the next harvest, a farmer’s ability to store the cowpeas also increases family income. By using the bags, a farm family income may rise by $150/year—a significant increase where most live on about $2/day.PICS technology also gives local manufacturers the opportunity to produce and sell PICS bags. Over the last five years, manufacturers and local businesses produced and sold more than two million PICS bags in West and Central Africa.Additionally, African entrepreneurs are finding new business opportunities in purchasing the PICS bags from manufacturers and selling them to farmers through their retail networks. 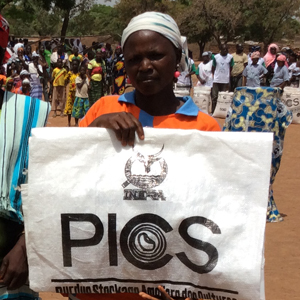 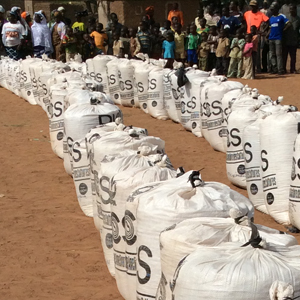